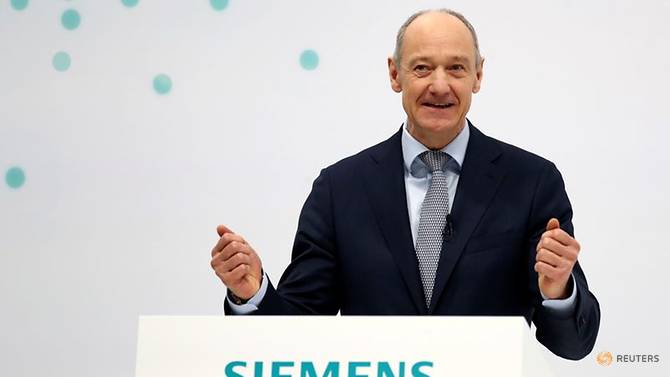 ZURICH: Siemens unveiled targets on Thursday to outpace the market by combining its core engineering business with digital expertise in the first strategic blueprint under new Chief Executive Roland Busch.

Busch, who took over as CEO from Joe Kaeser in February, wants to win customers and deliver growth by using Siemens's software and hardware, the company said at its investor day.

The German engineering company aims to expand beyond its traditional industrial customers by boosting its digital offering used to improve the performance of their factories, trains and buildings.

"Digilitalisation, automation and sustainability are growth engines for our business. Here, our core business and our digital business reinforce each other in a virtuous circle," Busch said in a statement.

Under the plan, Siemens raised its target for increasing its comparable annual revenue at a rate of 5per cent-7per cent, above global market growth and Siemens's own previous target. Both ran at 4per cent-5per cent.

Digital technology is expected to lead, with a faster growth rate of 10per cent per year from the 5.3 billion euros (US$6.33 billion) of revenues Siemens made in the area in 2020.

The company also hiked the profit margin targets for its mobility and smart infrastructure businesses, in the goals that will apply from October 2021, the start of Siemens's 2022 business year.

Under the strategy, Siemens said it will develop digital applications for specific industries and launch products more quickly in areas, including automation, artificial intelligence and cyber security.

The company, which competes with Switzerland's ABB, France's Schneider Electric and General Electric and Alstom, also wants to enter additional markets with a value of 120 billion euros through organic growth and acquisitions.

No details were given on how much Siemens would spend, but its US$700 million acquisition announced in May of U.S. electronic components company Supplyframe and the last year's US$16.4 billion purchase of Varian Medical Systems were examples of this approach.

Accompanying the targets will be a new 3 billion euro (US$3.58 billion) share buyback, starting in October to run until 2026. The buyback is a slowdown from the company's two 3 billion euro repurchases over the last five years.

Siemens also committed to a progressive dividend policy, which means a rising or stable annual pay out to shareholders.

Earnings per share, before the amortisation of goodwill for acquisitions would increase in the high single digit range, around 8per cent to 10per cent, the company added.

In an update on trading, Siemens said the favourable business development had continued, and it expected full year net income in the range of 5.7 to 6.2 billion euros.

The forecast included the impact of the 300 to 500 million euro integration costs associated with the Varian acquisition which had not been included in previous company outlook.

Research from iBASEt shows that manufacturing productivity falls behind when a business lacks...

When to use 3D printing for mass production

Additive manufacturing has come a long way since the 1980s. Though many believe the value of 3D...

The dental industry has made great advances in recent years thanks to the incorporation...

“Engineering a green future: How IoT can help.”

It’s not news anymore that climate-related events gravely impact more than 1 in 4...